Duramax 6.6L V8 Turbodiesel, Allison 1000 6-Speed Automatic, Dark Titanium Cloth. ** WHOLESALE SPECIAL ** Check out this Great Deal at " AS - IS " Wholesale Pricing!! We need to make room and for a Select Time, Limited Amounts of our Inventory has been Reduced to " AS - IS Wholesale Pricing. These Deals Won't Last Long, so Stop by Mon-Fri 8 to 8 / Sat 8 to 6, However we are Closed on Sundays.

Model Overview
Chevrolet's 2009 2500HD and 3500HD are heavy-duty versions of the Silverado pickup, all of which were completely redesigned back in 2007. The HDs are available in three cab styles (Regular, Extended, and Crew Cab) and two box configurations (standard and long). Extended Cab models come with smaller rear access doors that open 170 degrees and have fully opening windows. Crew Cab models come with four full-size doors.

Two suspensions are now offered on the HD trucks. The Z85 suspension is standard, and the optional Z71 suspension is oriented toward off-road duty and includes skid plates, along with other additional equipment.

Like the light-duty Silverado, the HD versions of the Silverado get two completely different interiors, depending on the intended use. The WT (Work Truck) and LT models, intended more for fleet work, come with a simplified instrument panel with large, functional controls, under-seat storage, and a cavernous double glove box. Amenities such as Bluetooth hands-free connectivity are now available. XM satellite radio comes standard. The luxurious LTZ, intended for those who might interested in towing in style, comes with an interior that rivals that of luxury SUVs, with a larger center console, heated leather bucket seats and chrome trim.

A 6.0L gasoline V8 engine with variable valve timing, making 353 horsepower and 373 ft-lb of torque, is standard on both models, and a 6.6L Duramax diesel, making 365 hp and 660 ft-lb, is optional. Both engines are mated to 6-speed automatic transmissions, and the Duramax is designed to be able to run on biodiesel fuels.

Driver and passenger front airbags are standard across the range, as is a tire pressure monitor and GM's OnStar system, while StabiliTrak stability control with Proactive Roll Avoidance is standard on Extended and Crew Cabs. 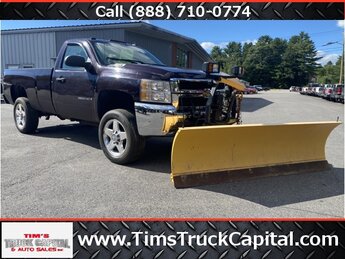 2016 Chevrolet Silverado 2500HD LT crew cab
Black
* Pricing - All vehicle pricing shown is assumed to be correct and accurate. Incentives, credit restrictions, qualifying programs, residency, and fees may raise, lower, or otherwise augment monthly payments. Additionally, incentives offered by the manufacturer are subject to change and may fluctuate or differ based on region and other considerations. Unless otherwise noted or specified, pricing shown does not include title, registration, or tax fees and costs.

* MPG - Vehicle information, as well as features and other inclusions, may vary by model and are based exclusively on standard equipment. No claims, warranties, or guarantees have been made related to the accuracy of customer payments, model equipment, or vehicle pricing. Please call with any questions you might have and to reassert the accuracy of any information presented here.
Close
Save
Close
Close