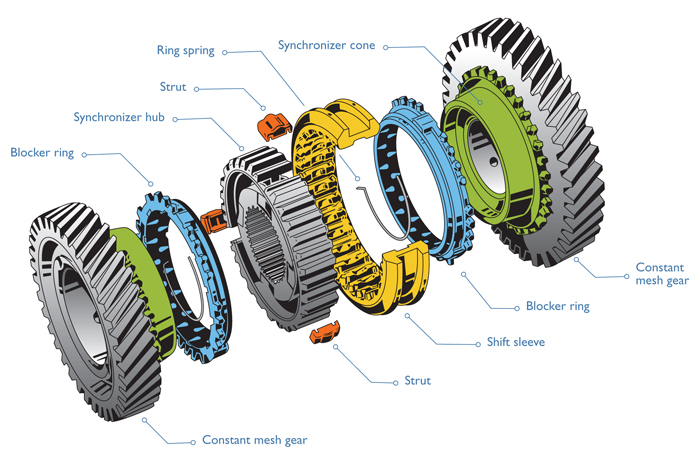 What Are Manual Transmission Synchronizers? - Part I

Shifting the gears in any manual transmission car moves a rod which in turn moves a fork. The latter engages the gear. Different forks are assigned for different gears. The function of the fork is to move collar to desired gear. The dog teeth on collar mesh with the holes present in the gear. This action engages the latter. The reverse gear is engaged via a small and separate idle gear. Reverse gear always moves in the direction opposite to the forward gears.

Double clutch was common in the past. It was allowed to disengage any gear, and permit collar and also next gear to attain same speed. The new gear is then engaged. The shift is then double-clutched by pushing clutch pedal. This frees engine from transmission. The collar is then moved into neutral. The driver the releases the clutch and revs up the engine. This gets the latter to the correct RPM value for next gear. This is done to get collar and next gear to spin at same rate so that the dog teeth is allowed to engage gear. With the engine hitting the correct speed, the driver depresses clutch again. This locks collar into correct position on next gear.

Modern cars employ synchronizers so that they could avoid need for any double clutching. A “synchro” or synchronizer allows the gear and collar to synchronize speeds while they are in contact. However, this happens prior to the engagement of the dog teeth. For the best cars, drive to Tim’s Truck Capital & Auto Sales Inc in Epsom, NH.