If you’re in the market for a subcompact SUV, it’s hard to top what the Buick Encore has to offer. They combine comfort and style, giving you an extremely functional vehicle that you can enjoy taking out on the road.

But while the Buick Encore is a great vehicle, it’s still best to understand exactly what it offers before you head out to purchase one. We understand, and that’s why we came up with this guide to give you a quick rundown of everything you need to know.

Buick announced the Encore in 2012, with the first production year rolling out in 2013. They sold just under 32,000 Encores in 2013, and the sales number rose every year until the entire industry took a hit in 2020.

By 2019 that 32,000 figure had risen to over 102,000 sold vehicles in the United States, making it one of their most popular vehicles. From 2013 through 2019 Buick sold over half a million Encores in the United States alone! So, if you’re in the market for a used Buick Encore, there are plenty of options out there for you to pick from. 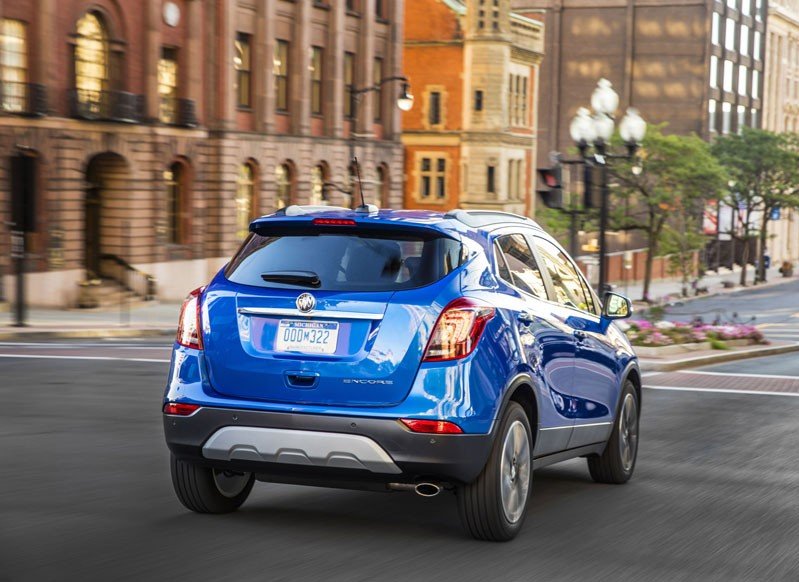 In 2019 Buick released the Encore GX, and sales started in 2020. It’s essentially an upgraded version of the Encore with a different engine package and a bit more cargo space. In large part because of the Encore GX, Buick plans to stop making the original Encore after the 2022 model year.

Buick didn’t change a ton with its engine options through the years, with every Encore offering a turbocharged 1.4-liter inline-four engine. The standard engine pushes 138 horsepower with 148 ft-lb of torque.

This means that you can get almost identical performance specs with some of the older Buick Encores than you can get with the new 2022 Encore! Unfortunately, the 2020 and 2021 model years only have the 138-horsepower engine available.

Still, most people aren’t going with a Buick Encore for its speed off the starting line. But it’s nice that they at least have enough pickup to get you around vehicles on the highway and up to speed on the on-ramp when you need it.

The last thing you want to do is bring home a new vehicle only to have maintenance issues plaguing you year after year and mile after mile. Fortunately, with the Encore that really isn’t an issue.

According to Repair Pal, the Buick Encore is one of the most reliable vehicles out there and has lower maintenance costs than most other vehicles.

In fact, they state that “major repairs are uncommon for the Encore,” and they list the average maintenance and repair costs well under $500 a year. That hits the trifecta for vehicle reliability, few problems, they’re rarely severe, and when problems do crop up, they don’t cost a ton to fix. Everything you’re looking for in a reliable vehicle.

This means you’re getting a vehicle that you can enjoy driving, and if something does happen, it’ll keep you safe too.

While Buick changes a lot of things about the Encore depending on the model year, the overall design stays the same. Because of this, two things that remain identical on every Encore are the cargo space and ground clearance.

Every Buick Encore sits 6.2 inches off the ground, putting it higher up than most sedans but a bit lower than many SUVs.

The cargo space also remains the same in every Encore, and with how much room they give you, that’s a good thing. Without counting the rear seating area you get 18.8 cubic feet of storage space, and if you fold the seats down you multiply that storage space to 48.4 cubic feet.

That’s plenty of room for sports gear, groceries, and just about anything else you need to take from place to place!

While newer Buick Encores have ditched the trim level philosophy, that wasn’t always the case. So, if you’re looking for a used Buick Encore, it’s important to know what the different trim levels Buick used, that way you have a basic understanding of what features you may or may not get.

The base trim package sometimes referred to as the 1SV, is just what it sounds like. Everything that you find in the base package you’ll find in every other option or an upgraded version of the same feature.

Still, Buick didn’t push out a bare-bones product at their base level. It all depends on the exact model year you go with, features like automatic headlights, a powered driver’s seat, and even front USB ports come standard depending on the model year.

One step up from the base model Buick Encore is the Encore Preferred. In earlier model years it was known as the Encore Convenience, but they’re pretty similar. They come with everything the base model comes with, but it opens up a few more standard features and a lot more options.

Features like all-wheel-drive, blind-spot monitoring, remote start, rear cross-traffic alert, and the moon roof are all available at this trim level. However, it depends on the model year and the original features that the first buyer opted for when they ordered the vehicle.

Once again, earlier model years didn’t use the Sport Touring name for this trim level, instead opting for the name Encore Leather. Still, they’re extremely similar, and they represent the same level.

The most notable difference that many people see from the Preferred to the Sport Touring trim level on many Buick Encores is the engine. While it comes standard with the same engine options as the Preferred and Base level trim packages, it’s the first option that lets you upgrade the engine.

However, there are still a lot of features that are simply options at this point. So a Sport Touring Encore might have the features you want, and some might not.

The Preferred II isn’t a trim level that’s available in every model year Encore, but if it is available it comes with a lot more standard features.

It comes with everything you’ll find in the Sport Touring trim level, but now options like blind-spot monitoring, rear cross-traffic alert, auto-dimming rearview mirrors, and dual-zone climate control are standard – not optional upgrades.

In many Encores the Essence is as good as it gets. That’s because not every Encore has the Premium trim package, so if you’re looking at an Encore Essence, you might be looking at the fully loaded Encore.

Even if you’re not, there are a lot of great features in the Encore Essence. Depending on the model year it has heated seats, a heated steering wheel, a leather interior, driver memory functions, and more.

The exact features you get depends on the model year of course, but if the Encore has it in that model year, it’s on the Premium.

There’s a lot to love with the Buick Encore, which is why it’s such a popular vehicle. Whether you’re looking for a vehicle to get you to and from work everyday or to take your kids to school in, the Buick Encore is versatile enough to handle it all.

Are you interested in a Buick Encore or do you have a question we didn’t answer? The pros at Tim’s Truck would love to help you out. If you have an Encore you’re interested in or need help tracking one down, Tim’s Truck will put in the leg work for you and get you behind the wheel!