The full-size pickup Dodge Ram 2500 was introduced in 1994 and was a big success from the very beginning. In 2003 and 2010, the Dodge Ram 2500 was named 'Truck of the Year' by Motor Trend Magazine. The first generation of the truck was produced from 1994 until 2002. The second generation of the Ram pickup trucks was such a big hit that the fully redesigned line of Ram pickup trucks became separate from Dodge in 2010. The 2500 and other Dodge pickup trucks have continued to grow in popularity.

The truck was driven by a series of powerful engines and smooth-shifting transmissions. They included a 3.9 liter, V6, a 5.2 liter V8, a 5.9 liter, V8, a 5.9 liter inline-six Cummins turbo diesel and an 8.0 liter, V10 engine. Those engines worked with either a 4-speed automatic, 5-speed manual or 6-speed manual transmissions. Dodge Ram 2500's second generation, which was sold from 2002 to 2009, was introduced at the Chicago Auto Show in 2001. But it didn't get into showrooms until the 2003 model year. The second generation of the Ram 2500 let buyers choose from a 5.7 liter, 345 horsepower engine with 375 pound-feet of torque to an 8.0 liter Magnum 310 horsepower, V10 engine which produces 450 pound-feet of torque. 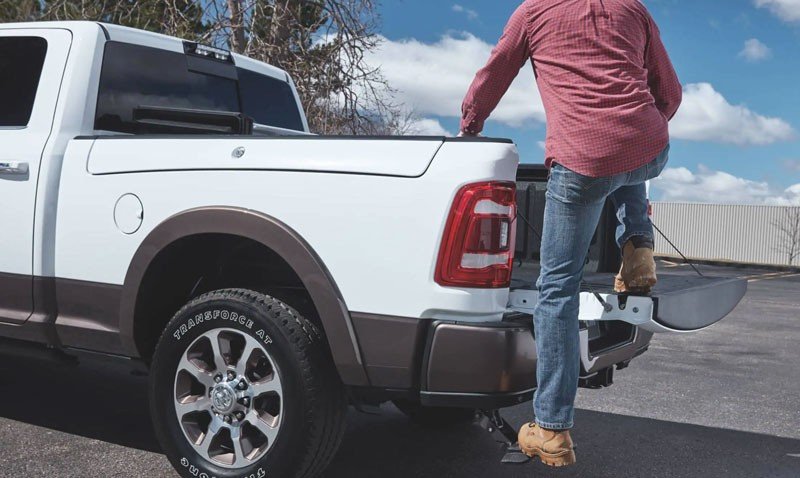 Each Year's Model Is Special

It Keeps Getting Better

The 2015 Ram 2500 with its countless options and trims and was among America's best-selling trucks. The 2016 version of it was acclaimed as among the most rugged trucks. The 2017 Ram 2500 had an incredibly long list of reasons it was among the leaders in heavy-duty pickup trucks. In 2018, the Ram 2500 was bigger, bolder and more capable than ever before. The full-size, heavy-duty 2019 Ram 2500 is known for its rugged workmanship. All of these Ram 2500 models and more are available for purchase at Tim's Truck. Peruse their inventory and you are sure to be impressed by the wide selection of Ram 2500s.

Some of the things people love about the Ram 2500 trucks is their rugged appearance, powerful engine and car-like drive. These things have helped this pickup truck to grow in popularity year after year. This awesome pickup truck is now stronger and sturdier than ever before. When Dodge began putting the ram's head hood ornament on their cars and trucks in the 1930s, it symbolized their vehicles' strength and power. Today, the Ram brand is a symbol of automotive excellence and superior performance. The Ram 2500 is the ultimate work truck. It's tough enough to handle any terrain or work conditions.

A Diverse Range Of Trim Levels

The Ram 2500 has long had a roomer and more comfortable cabin than any other heavy-duty pickup truck. Plus, its 5.7 liter Hemi, 6.7 liter diesel and an optional turbocharged V6, V8 and available V10 give the truck unmatched power for work or play and provide a smooth ride on any roadway. And it leads the pack with excellent safety features like driver side airbags and four wheel ABS brakes. It was the first full-size pickup with those safety features. Plus, its ride quality is enhanced by its superior suspension, steering, handling, as well as braking. And its 'big rig' style bed lets pickup truck enthusiasts haul more.

True To The Cause

To ensure pickup truck lovers continued to get the power, durability, increased towing capacity and superior performance they want and need for work or play, the Ram 2500 got technological upgrades that kept it ahead of the competition. Plus, even though it is focused on being able to do the most difficult tasks, the Ram 2500 also has an edgy, attractive, style and a long list of amenities that makes driving it a very enjoyable experience. But the automotive engineers never lost sight of the fact that this is a heavy-duty truck that is designed to go through the muck and mire to get the job done.

Not only was the Ram chosen 'Car of the Year in 2003 and 2010, Motor Trend chose the Ram trucks as 'Car of the Year' in both 2013 and 2014. What that means is if you buy a used Ram 2500 from Tim's Truck, you can rest assured that the truck can consistently do all the things you want a truck to do. If you need a heavy-duty truck to do a tough job, the RAM 2500 is a great choice. Whether you need a heavy-duty truck to tow heavy weights or haul large loads, you can't beat a Ram 2500. The entire lineup of Ram 2500 pickup trucks has proven again and again they have what it takes to get the job done.

If you buy a 2019 Ram 2500 from Tim's Truck you will be pleasantly surprised. The Ram 2500 was redesigned for the 2019 model year. That gave it more power, greater towing and hauling capacity, a more luxurious interior and more and better safety features. The Ram 2500 is much more than just a massive truck. It has advanced safety features like automatic emergency braking, forward collision warning and blind spot warning. This truck has set the bar a lot higher for the other heavy-duty trucks in its class. The redesigned Ram 2500 has emerged as being head and shoulders above the competition.

The Ram 2500 is big, burly, powerful-looking and durable. Like its smaller sibling the Ram 1500, the Ram 2500 has a bold grille as well as a high stance. Plus, it is available with a two-door regular cab, a four-door crew cab or a four-door 'mega' cab. Buyers often choose the available running board to make overcoming the high ground clearance and getting into the truck's cab easier. Many people are impressed by the truck's huge size and attractive appearance. It makes it a great truck for going to have fun, running errands or impressing potential clients with its powerful look.

The Ram 2500 has several very effective powertrain options. One is a 410 horsepower, 6.4 liter, V8 gas engine that produces 429 pound-feet of torque. The engine works in tandem with an 8-speed automatic transmission. Another is either a 370 horsepower or a 410 horsepower, 6.7 liter turbocharged inline-6 diesel engine that is mated to a six-speed automatic transmission. It delivers between 850 and 1,000 pound-feet of torque. Plus, the Ram 2500 has a maximum payload capacity of 4,050 pounds. When properly equipped, it can tow as much as 19,780 pounds. That's enough to handle just about any task.

The Ram 2500 has continued to evolve, change and get better every year. Tim's Truck has high-end versions of the Ram 2500 that have leather and wood trim, active noise-cancellation systems, as well as special acoustic glass. Plus, they have the excellent Uconnect infotainment system. The pickups have a 12-inch fully configurable screen, wireless smartphone connectivity, Apple CarPlay, Android Auto, great speakers and a number of other features to entertain the occupants. The trucks also have huge, useful cubbies as well as storage bins. They have all you need for work or entertainment.

The ride of the Ram 2500 is not stiff and snappy like other heavy-duty trucks. Instead, it's comfortable and controlled. It has great steering dynamics, accurate handling, is easy to maneuver, the steering wheel provides good feedback and the truck has excellent traction. The Ram 2500 has a smooth shifting transmission and strong stopping power. Plus, it has great hauling, towing and off-road capabilities. It's rugged, reliable, powerful and has an array safety, driver-assistance and smart technology. It has a roomy, luxurious interior and this versatile truck can tow extra-heavy trailers.