The Ford Escape has been one of the most popular SUVs on the market for many years. It’s a compact SUV, but it is slightly larger than others in its class, giving it a more substantial feel and a more comfortable ride. At the same time, the Escape has always offered great performance, and people love to drive them. The reliable SUV has now made it through four generations for good reason.

Thanks to the Escape’s longevity, you can find a great number of quality previously owned models that offer the features you need at a price you can comfortably afford. Even if you are considering new vehicles, know that the Ford Escape is packed with great features and still comes at a great price.

Here’s a look at how the Ford Escape has evolved over the years, with some information about what you can expect to find by generation when you are shopping for previously owned models:

The very first Ford Escape was developed jointly by Mazda. The Ford Escape distinguished itself with a car-like, unibody design that had a fully independent suspension system, as well as rack-and-pinion steering. In contrast, most larger SUVs at the time had a truck-based, body-on-frame design. The Ford Escape also came with an optional full-time, all-wheel drive system for those who were interested in off-roading.

The first Escape introduced in North America had a 2.0-liter Zetec engine, a five-speed manual transmission and 16-inch wheels that provided zippy performance. Some of the standard equipment for that first model included power windows and door locks, keyless entry, an AM/FM stereo with cassette and CD players, and a folding rear-bench seat.

Many features were optional, such as a V6 engine alloy wheels, and automatic transmission. As the model evolved throughout the first generation, many features were also added, such as satellite radio, power sunroof, a premium sound system with amplifier and subwoofer, and a six-disc CD changer.

A hybrid model was also introduced in 2005.

With the introduction of the second generation, the Ford Escape got some styling updates that were inspired by some of its Ford brothers, including the Explorer, the Expedition, and the Edge. Some of the design changes included a stylish new grille, bigger headlights, and a side profile with smooth lines and rounded-off wheel arches. The interior also got some stylish upgrades and some new technology features.

The very first Ford Escape for the second generation became the first of two vehicles (along with the Mercury Mariner) to get the new pull-drift steering mode from Ford. The new mode was designed to give software control to the Electric Power Steering system, which provided greater control behind the wheel.

The starter engine at the beginning of the second generation of the Ford Escape was a 2.5-liter Duratec 25, which put out 171 horsepower and 171 lb-ft of torque. At the same time, the Escape also increased fuel efficiency.

During the second generation, the Escape also saw many style upgrades. It got a revised front spoiler to improve aerodynamics, as well as new rear tire spoilers. An optional sport appearance package came with a gloss black front grille, a front bumper with a gloss black applique, body color rocker covers and door handles, black headlight housing, and a gloss black rear bumper. 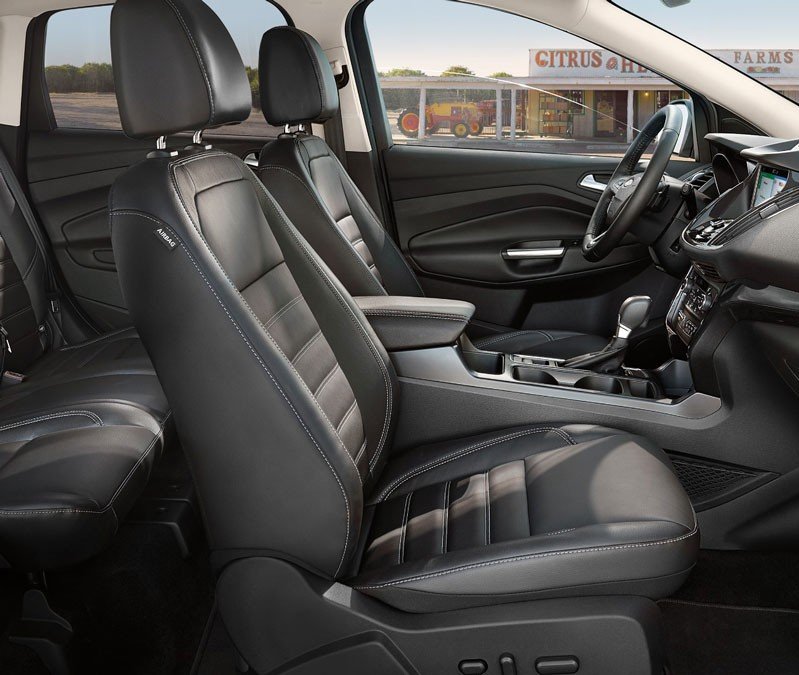 Some features added during the second generation of the Ford Escape include the Ford MyKey, the Integrated Spotter Mirror for better monitoring of blind spots, electronic stability control, and trailer sway controls. The Ford SYNC system also became standard for the upper-level trims, such as the Hybrid and Limited trim levels.

The third generation of the Ford Escape received some rebadging by Ford of Europe, and it received a facelift and some other upgrades. In the European market, the nearly identical Ford Kuga was released. Some markets that had offered the Ford Escape changed the name to the Ford Kuga. Some North American markets also sold the Kuga, so it is possible that when you are searching for previously owned models of the Ford Escape, you can still find it under the Kuga nameplate.

The Escape/Kuga received a redesign for the third generation. Though the individual changes were subtle, they added up to make a big impact, giving the Escape a lot more personality. The thin, strip grille was transformed into a large, hexagonal grille with the hood flaring up on top. The front fascia was redesigned with new fog lights and a new spoiler. The profile lines became more pronounced, and the Escape’s top half got a little bolder.

Inside, the Escape looked just as good. The center console featured a large display for the infotainment system, and the controls were all conveniently placed in an ergonomic design. Soft-touch materials were used throughout. Graceful lines and well-placed chrome accents created a beautiful, upscale look. A split-folding backseat also gave people more options for storing cargo.

The Escape came with some new features in the third generation, such as a hands-free power liftgate, a panoramic moonroof, anti lock brakes, front and side impact airbags for the front seats, and more. Some optional features that began being offered included automated parking, a blind spot warning system, and rear cross-traffic alert. 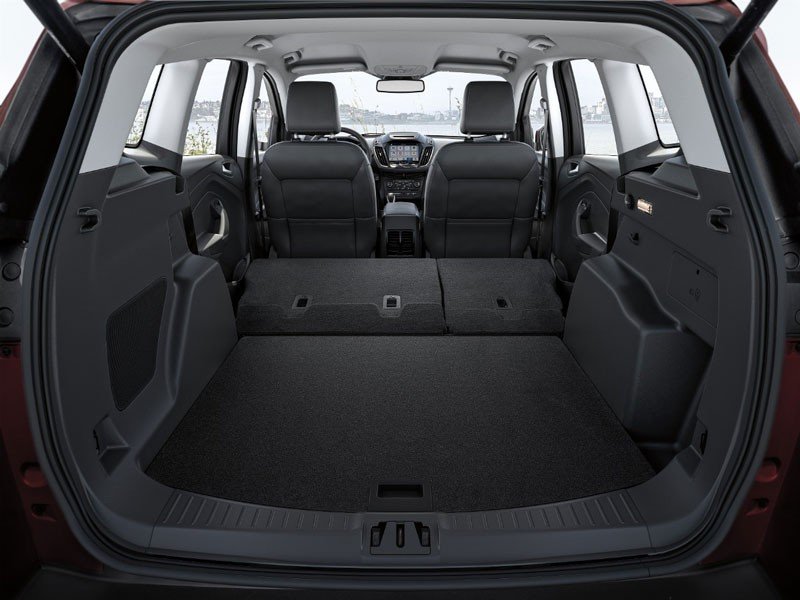 The third generation of the Ford Escape continued to offer reliable performance while also improving its design and adding more comfort and convenience features to make driving fun. Safety features continued to be improved, and the Escape maintained top safety marks throughout this generation.

The fourth generation of the Ford Escape is near its beginning, and it represents some of the most exciting developments for the popular SUV yet.

One of the big changes for the fourth generation of the Ford Escape is the introduction of four new engine and transmission combinations. Two of the new options are turbocharged engines that are paired with an eight-speed automatic transmission. One is a turbocharged 1.5-liter inline three-cylinder that puts out 181 horsepower and 190 lb-ft of torque. The other is a turbocharged 2.0-liter four-cylinder that puts out 250 horsepower and 280 lb-ft of torque. Both provide peppy performance and enough power to get through some tough terrain or to tow some heavier loads. They also offer improved fuel efficiency over previous gas engine options.

The two other engine options are plug-in gas-electric hybrids that can save drivers significantly on gas costs and help reduce the negative impact on the environment. The first engine option is a 2.0-liter four-cylinder gas engine that runs on an Atkinson cycle with two electric motors. This engine uses a planetary gear set that allows for gear-ratio changes, which makes it perform similarly to a continuously variable transmission. The second hybrid engine is a plug-in version of the standard hybrid engine. The standard hybrid engine puts out a combined 200 horsepower, while the plug-in hybrid engine puts out a combined 209 horsepower.

In addition to these great engine options, some of the features added during the third generation of the Ford Escape included blind spot monitoring, lane keep assist, forward collision mitigation, drive mode selector, a 12.3-inch digital gauge cluster, and a large touchscreen display for the infotainment system. Many of the features that slowly evolved over previous generations are now standard, such as the Sync 3 infotainment system, and you have the option for upgrades like leather upholstery and heated seating.

The newest Ford Escapes have also received slight design upgrades, making the SUV look more stylish and luxurious than ever. The lines have been smoothed out throughout the profile, making the Escape look sleeker and more aerodynamic. At the same time, well-placed grooves and curves add visual appeal to what was once a very boxy design. The newest Escape is on trend with its design choices while also subtly pushing trends forward.

Choosing the Right Ford Escape for You

For 20 years, the Ford Escape has been offering the best in driving technology and style, giving you plenty to choose from when you are shopping for your next vehicle. You aren’t limited to what’s in the current model. Though you may find that the latest Ford Escape offers everything you want in a vehicle, you have plenty of options in previously owned models if it doesn’t. The friendly and knowledgeable specialists at Tim’s Truck Capital are ready to help you find the perfect Ford Escape model to fit all your needs.

Tim’s Truck Capital has a large selection of new and previously owned Ford Escapes with a variety of configurations. You can get the very latest technology in one of our new Escapes, or you can save money without sacrificing quality by looking at one of the previously owned Escapes. We’ll help you find the right model, and you can take a test drive to get a feel for how these great SUVs perform in real time. Visit us today to start exploring and find your perfect Ford Escape!