If you’re serious about finding a truck you can use for some serious work, then you can’t go wrong with a Ford F-250. But the F-250 has changed throughout the years, and there’s far more than one option for you to choose from.

That’s why we came up with this guide to walk you through everything you need to know about the F-250. From trim levels to different configurations and even the different generations, we broke it all down for you here.

Also, keep in mind that while these are the most common engine configurations, the exact horsepower and torque specs can vary a little from model year to model year.

Keep in mind that these features are for the 2020 F-250, but you can expect similar differences from each trim level according to the model year of the truck.

The F-250 XL is essentially Ford’s base model for the truck, but that doesn’t mean it doesn’t have many features. It still has a 2.3” productivity screen, automatic high beams, a rear-view camera, and trailer sway control.

Sure the 2.3” screen is smaller than every other model, and there’s plenty of features that you’re missing, but if you’re looking for a work truck, it certainly gets the job done for you.

The F-250 XLT is just one step up from the XL, but it brings a whole new host of features. For starters, the 2.3” productivity screen grows to 4.2”, and you get blind-spot monitoring, cross-traffic alerts, lane-keeping alerts, pre-collision assistance, and even heated side-view mirrors!

So, while it’s a little more in price than the XL, it also comes with tons of safety features that can keep your truck out of a wreck, which helps protect both you and your new truck!

While the XL and XLT are both fine trucks, if you’re looking for a little more luxury in your truck then the Lariat is a fine choice. The productivity screen grows to an impressive 8”, you get a leather-wrapped steering wheel, dual-zone temperature control, and an auto-dimming rear-view mirror.

Just keep in mind that while those are pretty much all convenience features, it does come with a reverse sensing system that can help you park your new F-250 with ease.

The 2020 King Ranch really starts to incorporate some of the newest technologies on the market, and that’s exactly what each King Ranch option does for Ford throughout the years.

This option includes heated and cooled front seats, a heated steering wheel, a driver’s seat memory system, a voice-activated navigation system, and a wireless charging pad for your devices. The King Ranch F-250 is all about luxury and comfort, and it delivers in almost every way. 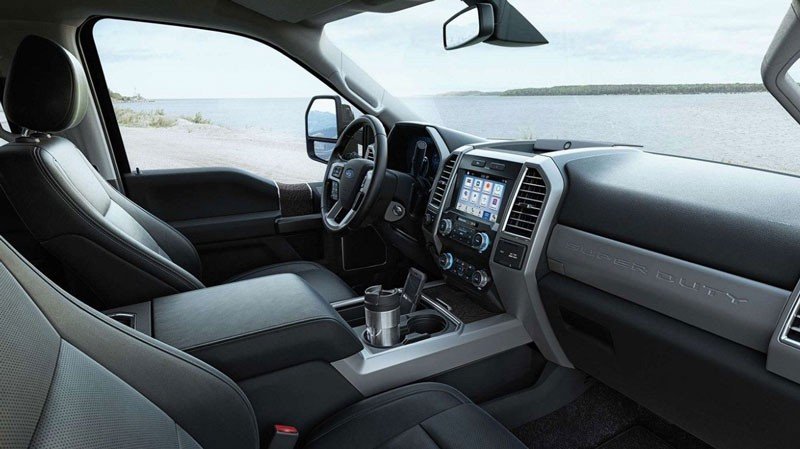 One step down from the Limited F-250 is the Platinum option. It’s a high-end option that includes just about everything from the previous trim levels, but it also has power deployable running boards, adaptive cruise control, and so much more.

While it might have “Limited” in the name, the truth is that a Limited F-250 Super Duty is pretty much a fully loaded option. Not only does it have all the top features of the previously mentioned models, but it also has a twin-panel moonroof, a trailer tow camera system, and even more luxury features.

It’s a truck with all the bells and whistles, and there’s certainly nothing wrong with that.

A Regular cab F-250 is pretty much the standard option, and it’s a two-door option that only gives you enough seating for three people. It’s the go-to choice for many work trucks, and if you’re not looking to haul around many passengers, it’s all you need.

Just keep in mind that it does shrink the interior storage space a little, but it’s not by much. Considering you’re likely planning to haul everything around in the bed of your truck anyways, it’s no big deal!

The SuperCab, also known as the extended cab, transforms your F-250 from a two-door option into a four-door vehicle. This gives you more space inside the cab of your truck and comfortably expands the total number of seats to either five or six depending on the front seat configuration.

While the SuperCab has four doors, if you're looking for the maximum amount of space for your passengers you want the Crew Cab. The Crew Cab features an extra 10” of legroom for your rear passengers, which makes it a far more comfortable experience for them.

A regular bed on a Ford F-250 measures 6.8’, and that’s more than enough for most people. You can pair this bed option with any of the cab options, which means the overall length of your truck depends on both the bed size and the cab size you choose!

While the F-250 regular bed measures 6.8’, if you need a little extra space, you can upgrade to the 8.2’ long bed option. Once again, the overall length of your truck depends on both the cab and bed selection, so the largest F-250 possible would be one with both a crew cab and a long bed.

The F-250 Through the Years

While Ford has been making vehicles since 1903, it took them a little while longer to come up with the F-series line. The Ford Super Duty line started producing vehicles in 1999, so it’s not all that surprising that they’ve made a few changes along the way.

You can break down all the changes into four generations, and that’s exactly what we did here to help find what you’re looking for.

The first generation of the heavy-duty Ford Super Duty Line was a huge success, and that’s a big reason that it stuck around for eight years before they moved onto the second generation. The Ford Super Duty line was marked by reinforced suspensions and chassis to help with towing and hauling.

It’s a classic 90’s/early 2000s truck in both appearance and performance. It features a large grille paired with a raised hood line for a distinctive Ford truck appearance.

The second-generation F250 features a new 6.4L PowerStroke diesel, and it featured towing capabilities and features that helped make the entire process easier.

It didn’t take long for Ford to revamp their design again after the second generation, and in 2011 they officially unveiled the third generation in their F-series Super Duty line. Not only did Ford upgrade the engines again, but they also overhauled the exterior appearance.

The grille grew, as did the durability and size of the frame. This extra-thick frame increased the hauling and towing ability of the truck, and that’s no small feat.

While the third generation of F-Series Super Duty trucks outlasted the second-generation ones, we’d be lying if we said that they lasted a long time. In 2017 Ford went back to the drawing board again and came away with their fourth-generation truck.

Finally, while the engine specs are extremely similar to previous models, they did manage to drop a bit of weight without compromising any performance. This means that the same engine takes you faster, all while it produces a little more torque from previous generations.

With so many different configurations and customization options with the F-250 Super Duty, it’s no wonder that it’s one of the most popular trucks out there. Whether you’re looking for a truck to take on the job site or simply need one to haul around your gear or trailers, then an F-250 might just be the way to go.

So, why not stop by Tim’s Truck and see what the different options out there are? Because you might just find that the F-250 is what you’ve been looking for after all.