Ford has long had a reputation for rugged and dependable trucks, and the Super Duty F-350 is one of its strongest performers. The Super Duty F-350 has always come with some of the strongest engines in the Ford line-up, allowing it to take on any terrain and to haul just about any load. You can depend on the Super Duty F-350 for your work, or you can take it out on your weekend adventures, knowing that it will always deliver what you need.

Our friendly associates will help you find the perfect, previously owned Super Duty F-350 based on your preferences and needs. Here’s what you will find on the Ford Super Duty F-350, depending on the model year you are considering:

You might not think that a truck that’s a couple decades old would still be worth buying, but the Ford Super Duty F-350 is the exception. We have previously owned models from this generation for sale, and they still offer dependable performance.The first Super Duty F-350 came with a chassis cab, but different bed lengths and wheelbases were available. Two-wheel drive was the standard configuration, but all-wheel drive was optional. A dual rear-wheel axle was also available for either drive option. The truck had a Twin I-Beam independent front suspension with coil springs. The rear suspension had 3-inch wide leaf springs and staggered shock absorbers. 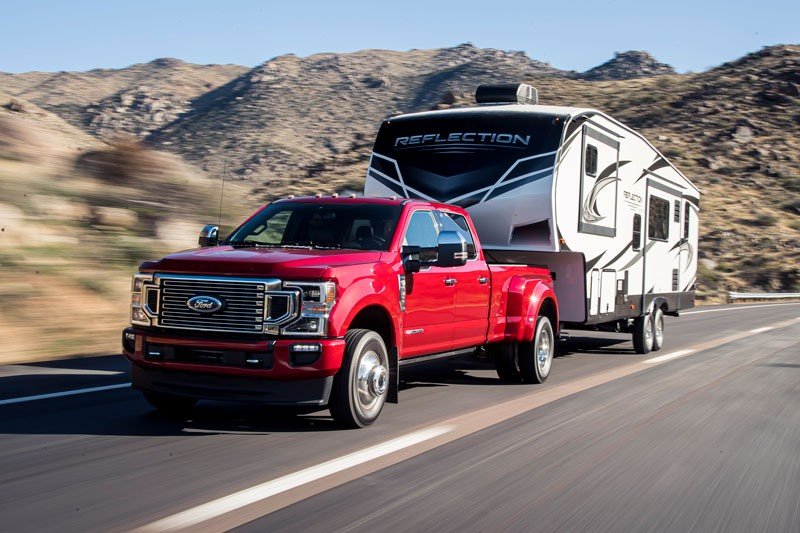 In 2005, the Super Duty F-350 (and other Ford Super Duty trucks) received a mid-generation refresh. Some exterior updates included a new grille, front bumper, and headlights. The engine was upgraded to a 24-valve V8 that put out 300 horsepower and 365 lb-ft of torque. To accommodate the increase in power, a larger alternator was added, as well as larger wheels and four-wheel disc brakes. Interior updates included a driver-side glove compartment and optional dashboard-mounted auxiliary switches. An optional trailer brake controller was built into the dashboard.

In 2003, the King Ranch trim package began to be offered for the Super Duty F-350. It included leather seats, steering wheel-mounted audio and climate controls, heated seats, and other options.

The second generation was short-lived – only two years – but it saw big changes for the model. With the introduction of the 2008 model, the Ford Super Duty F-350 was upgraded with a 6.4-liter Power Stroke Diesel V8 that put out 350 horsepower and 650 lb-ft of torque. Some tweaks were made to the new engine to correct issues with the previous engine option, including new piezo fuel injectors and sequential turbos.

Some other features introduced with this generation of the Super Duty F-350 included an optional concealed slide-out step for the tailgate, as well as a swing-up hand grab bar. Trucks that had the diesel engine and TorqShift transmission also were able to be outfitted with a rapid-heat supplemental cab heater that would quickly raise the temperature so the engine could perform comfortably. 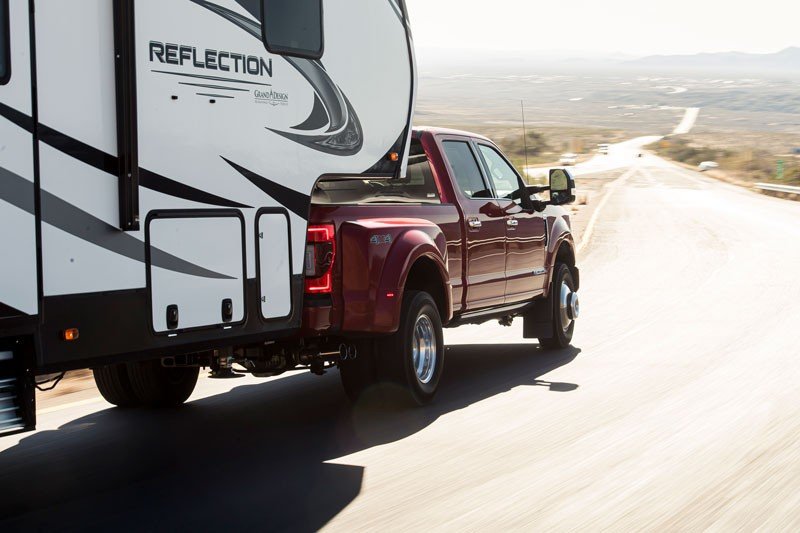 A few tweaks were made in the following model years, such as the addition and deletion of certain paint colors, but the F-350 remained largely the same through this generation.

With the third generation, the Super Duty F-350 and the full Super Duty lineup received an exterior makeover. In particular, the F-350 go a bigger front fascia that made the front profile look taller and more imposing. The truck’s overall silhouette was sleeker, with more rounded off edges and glossier accents. It was also made with the thickest gauge steel frame of any heavy duty truck at the time.

The engine options for the Super Duty F-350 this generation were a 6.2-liter Boss SOHC V8 and a 6.7-liter Power Stroke turbodiesel. Transmission options included a five-speed manual or a six-speed 6R140 automatic. The F-350 was able to tow up to 21,600 pounds.

One unique feature introduced for the opening model year was a locking differential. It was only available on trucks equipped with all-wheel drive and a rear Sterling 10.5 axle. The Super Duty F-350 also had hydro-boost brakes until the 2015 model year, when they switched to vented disc brakes.

The latest generation of the Ford Super Duty F-350 started in 2017, and it continues to build on the legacy of excellence that Ford has created with the model. The 2017 model was the first all-new Super Duty F-350 since the inaugural model. The 2017 model featured a 95 percent high-strength steel frame and a 6000 series aluminum alloy body. The aluminum was a military grade alloy. The F-350 also had the same body as all the Super Duty trucks in the series, and it dropped the front fenders it carried since its inception in favor of a stand-alone front grille that was widened to integrate the headlights.

The interior also received some updates that made the truck more similar to the Ford F-150.

The starting model year shared the same engine lineup as the previous model year, but some tweaks resulted in increased torque, which came in handy for towing and for handling rough terrain. In 2020, the engine was upgraded to put out 475 horsepower and 1,050 lb-ft of torque. The 2020 model also introduced a 7.3-liter gasoline engine. All engines were paired with a TorqShift six-speed automatic transmission. There was an optional five-speed manual transmission for the gas engine.

The 2020 model received other updates besides the engine, including a new grille and tailgate, some new wheel options, and a few tweaks for the trim levels, such as higher-quality interior materials for the Limited trim. The trim levels for the current generation include the XL, XLT, Lariat, King Ranch, and Platinum.

In 2020, Ford also brought back the Tremor nameplate for the F-350. Previously, the Tremor was a sport appearance package for the Ford F-150. The F-350 Tremor came with a suspension lift, upgraded tires and wheels, blacked out exterior accents, and a Trailer Reverse Guidance System.

Choosing the Right Ford Super Duty F-350 for You

Tim’s Truck Capital carries a large selection of previously owned vehicles, including many Ford Super Duty F-350s from various model years. We carefully inspect all the vehicles we accept for sale before they go on our lot, and all our F-350s are high quality and will offer many more years of dependable performance.

Our friendly and knowledgeable associates are ready to help you find the perfect Ford Super Duty F-350 to fit your needs and preferences. Because our models are previously owned, they can carry a variety of packages and other add-ons, so you can get unique configurations for a fraction of the price of what these vehicles cost new. We also carry previously owned vehicles from the last couple of years that look and perform just like new.

Visit us today to explore our selection of Ford Super Duty F-350s and find your perfect new truck!