The Kia Soul has already made a big impact in its relatively short history. It burst onto the scene in 2008 with a look that turned heads and got people talking, and it won hearts with its reliable performance and its extensive slate of features. The Korean automaker has been building on the Soul’s platform over the years, improving its design, its technology, and its performance along the way. The Soul continues to be a top contender in the SUV market.

Whether you are shopping for a new vehicle or a quality previously owned one, the Kia Soul has plenty to offer. Both its newer models and each of its previous models have something great to offer for all types of drivers. Take a closer look at the evolution of the Kia Soul to learn what you’ll find if you shop for new or previously owned models.

The first Kia Soul was introduced in 2008 for the 2009 model year. It immediately made a splash, winning awards and accolades that first year and throughout its early years. The Soul won the Red Dot Design Award in 2009, was named one of Kelley Blue Book’s “Five Great Deals” for that year, and was recognized as a “Best Value” by the Texas Auto Writers Association. Kelley Blue Book also named it one of the “Coolest New Cars Under $18,000.” It also earned accolades around the world, being named Best Car 2009 by the Chilean newspaper La Tercera and Kia being named Best Maker of the Year 2009 in Chile. 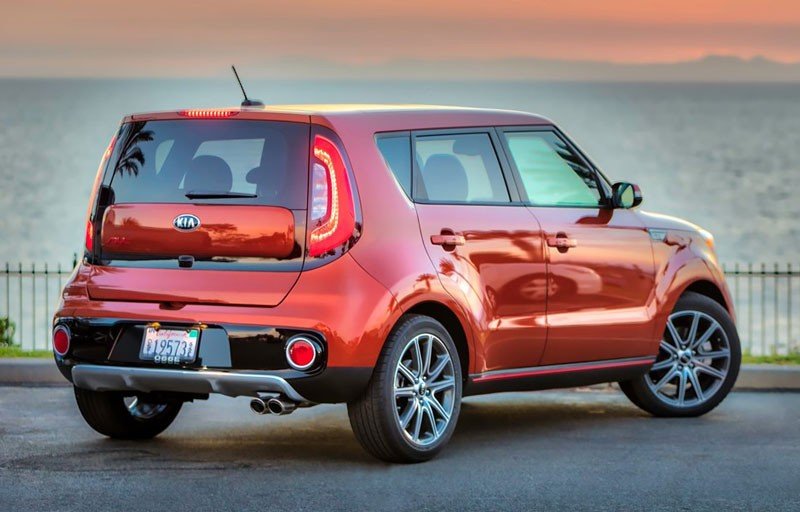 The Soul continued that streak. It was named one of Time’s Most Exciting Cars of 2010, and Autoweek called it one of the 10 Great and Safe Rides for Teens. Popular Mechanics also gave it the 2010 Automotive Excellence Award, and FAMA Magazine named it Small Car of the Year.

The Kia Soul earned so much praise thanks to its combination of style, dependable performance, and advanced safety and technology features. The boxy SUV had a bold and unique look. The boxy frame offered enough interior space for comfort and for plenty of cargo, but it also had a stylized look that made the SUV much more than a functional choice.

The interior featured comfortable seating with bucket seats up front and a bench seat in the back that could fold flat to easily accommodate cargo. Entertainment technology included a six-speaker audio system with a CD player, Sirius satellite radio, and USB ports for streaming. Upgrades were introduced in subsequent model years in the first generation, including an integrated key and remote, standard Bluetooth, steering wheel-mounted audio controls, and power folding heated mirrors.

The Kia Soul earned top safety ratings right out of the gate. The Euro NCAP gave it the maximum five-star rating, putting it among the safest family cars in the world at that time. The Australasian New Car Assessment Program also gave the Soul a five-star rating for its New Zealand version.

Multiple special editions were introduced during the first generation, including the Kia Soul Denim, the Kia Soul Dragon, the Kia Soul Tiger, and the Soul Flex. Each featured special styling, like limited edited paint colors, as well as other special features. For example, the Kia Soul Dragon came with black dragon graphics, leather-trimmed seats, and gloss-black bumper inserts. The Soul Flex was the first Korean flexible fuel vehicle that was able to run on a blend of E20-E25 gas up to E100 gas. It had 44 percent greater fuel efficiency compared to the standard Soul model.

When you are shopping for previously owned Kia Soul models, you are more likely to find second generation models. The good news is that the second generation had plenty to offer, building on the outstanding foundation that the first generation laid for a more stylish and sophisticated SUV.

The second generation of the Kia Soul stuck to its boxy roots, but its new styling was smoother around the edges. The flat lines and sharp angles started to get a bit more slanted and rounded at the corners. It had a sleeker look that brought it into line with its contemporaries without sacrificing its personality. The redesign also included a new rear end with a “floating” body color panel integrated into the liftgage and high-mounted tail lights. 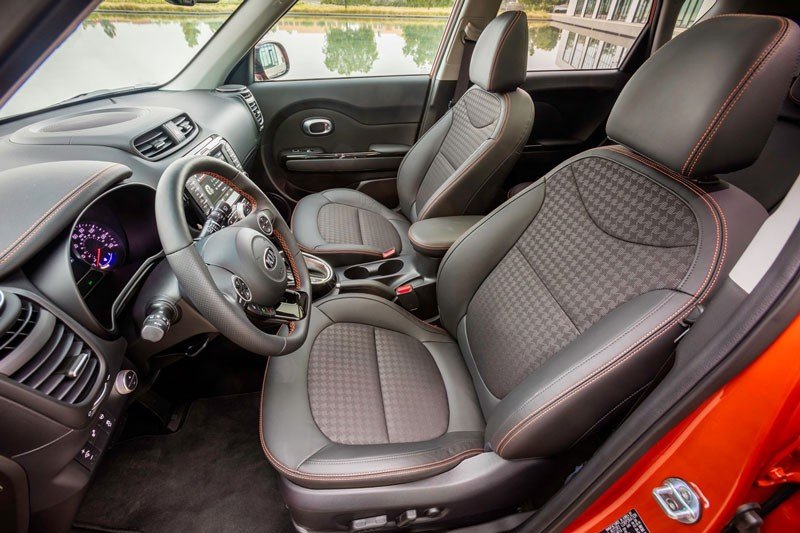 The first Soul in the second generation came with two engine options: a 1.6-liter Gamma GDI engine or a 2.0-liter Nu GDI engine. Both came with a choice of a six-speed manual transmission or a six-speed automatic transmission. A diesel engine option was made available for European models, but it wouldn’t be an option for American models until later in this generation.

Midway through the second generation, the Soul got a bit of a redesign, which included both cosmetic and structural changes. Standard models got new paint colors and headlight options, as well as changes to the trim levels. In the top trim level, the 2.0-liter Nu engine was replaced by a 1.6-liter turbocharged gas engine. The change added 40 horsepower and 45 lb-ft of torque, resulting in this Soul being one of the fastest vehicles in its class. That more powerful engine was paired with a seven-speed Dual-clutch transmission (ditching the six-speed automatic that was previously offered).

Safety ratings continued to be good for the Soul throughout its second generation, though they dipped a bit to four stars, rather than the previous five.

A few special editions were introduced in the second generation, including the Red Line edition in 2014, the Kia Soul EV in 2015, and the Kia Soul Autonomous Vehicle in 2016. The Red Line edition was a performance-inspired edition that included upgrades like custom 18-inch alloy wheels, a direct-injected GDI engine, a white body kit with red accents, and more. The Kia Soul EV was an all-electric vehicle that had a range of over 120 miles and fast charging capability. It was initially offered in only select markets, but later became more widely available.

The Kia Soul had a lot to offer in its second generation, and those models continue to offer reliable performance and a great driving experience to drivers everywhere.

The Kia Soul is in its third generation, and it has shown no signs of slowing down. The boxy SUV has continued to see styling refinements, taking on a sleeker and more sophisticated look while sticking to its unique aesthetics. Some of the key styling updates on the third generation of the Kia Soul include the slim headlights that seem to blend right into the horizontal grille, the large trapezoidal air intake, the closely sculpted wheel wheels, and subtle body detailing throughout.

The Kia Soul continues to get great safety ratings in its third generation, and it offers up some of the best safety and entertainment technology. Some of the basic features include satellite radio, Bluetooth streaming, smart device integration, automatic climate control, and more.

Thanks to its great performance, its unique styling, and its wonderful features, the Kia Soul has continued to sell in big numbers. In fact, it was the best-selling subcompact in the United States from 2011 to 2018.

Finding the Perfect Kia Soul for You

You have so many great options if you are thinking about buying a Kia Soul for your next vehicle. There are a range of great, previously owned options, and you can find many of them at Tim’s Truck Capital. Our knowledgeable associates are ready to help you explore what each of the model years has to offer and to find the perfect configuration to meet your needs. Visit us today to start exploring our selection and to take a test drive. You’ll fall in love with the Kia Soul, and then our finance specialists will help you find the terms to fit your budget. We’ll help you drive away with the next vehicle that you’ll love.