This compact pickup truck has been winning over drivers for decades thanks to its reliable performance over a long time. You can find some of the first models still on the road today, given that their owners gave them the right care over the years. Nissan built a truck to last, and it has been reliably serving drivers for years now.

If you are thinking of a new truck, you have a large selection of previously owned Nissan Frontier models to choose from, with evolving style, performance, and features available. Here’s a closer look at what the Nissan Frontier has to offer:

The first generation of the Frontier lasted seven years, and it got a mid-generation facelift in the year 2000. The first models in the generation had a compact and utilitarian design that was more focused on practicality than style. The 2000 facelift gave the truck bolder styling to appeal to those who wanted a truck not just for work needs, but also for everyday driving. The profile was beefed up, more detailing was added throughout the body, and it received features like built-in fender flares and tailgates.

The Frontier had much to offer right out of the gate, but it built steadily on that great foundation over the years.

Multiple powertrains were offered during the first generation of the Nissan Frontier, depending on the year, the configuration, and the market. Possible engines included a 2.0-liter four cylinder on up to a 3.3-liter V6, producing horsepower of 100 to 210. Turbodiesel and diesel options were also available. A five-speed manual transmission was standard. The truck was initially designed for light-duty work, but its abilities were increased to provide more power and towing capacity for more work needs.

1999 was a big year for the first generation of the Nissan Frontier. In addition to getting the facelift and the first crew cab with all full-sized doors, the Frontier also got a special edition: The Desert Runner. The special edition featured a king cab on a 4x4 base, giving it a bigger ride height. The Desert Runner came with a 2WD drivetrain, and it included a four- or five-speed transmission. In 2001, the special edition was updated with some exterior style changes and a supercharged V6 engine.

With its second generation, the Nissan Frontier started to shed its compact status, moving toward a mid-sized classification. The Frontier took on the Nissan F-Alpha platform and exterior body styling, and it looked a lot like the full-sized Nissan Titan. The Frontier had a bigger wheelbase, longer length, and a fully boxed ladder frame.

The Frontier got a lot of updates for this generation, including a mid-generation refresh, new engine options, and increased towing capacity.

The second generation of the Nissan Frontier premiered a new, stronger engine – a 4.0-liter VQ-family V6 that produced 261 horsepower and 281 lb-ft of torque. A regular four-cylinder was also available, which featured lower horsepower, but still offered reliable and smooth performance. A six-speed manual transmission came standard, but a five-speed automatic transmission was optional. Rear- and four-wheel drive were both options. 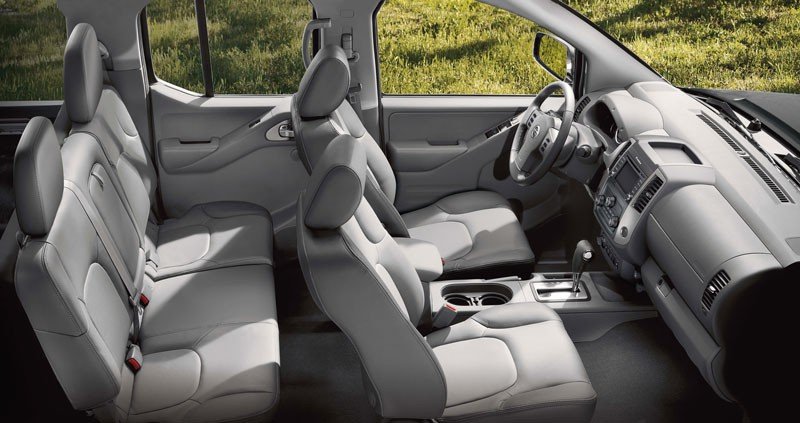 In 2009, the Nissan Frontier was given a facelift that made it more stylish and sleek. The new look included a V-shaped grille, a rounder and more pronounced bumper, and subtle changes to the headlights and bonnet. The Frontier also got six-spoke, 17-inch alloy wheels, and 18-inch alloy wheels were offered as an option.

The interior also got an update with softer and higher-quality materials throughout. Design changes were made to the center console, door trim, instrument binnacle layout, and fascia. Bright/gloss finishes were also used throughout the interior.

During its second generation, the Nissan Frontier started to get more technology and comfort features – keeping up with the trend to move trucks away from being just work vehicles. Some of the standard entertainment features included during this generation included a six-stack CD audio system, speed-sensing volume, MP3 compatibility, and Bluetooth compatibility. Other features included dual-zone climate control for the larger cab configurations, speed-sensitive variable windshield wipers, and electric folding side mirrors.

Thanks to many of the upgrades introduced in this generation, the Nissan Frontier garnered many awards. The 2010 model won the U.S. National Highway Traffic Safety Administration’s Highest Side-Impact Safety Rating and the J.D. Power and Associates Highest Ranked Midsize Pickup in Initial Quality Award. The 2011 model was named an Edmunds.com Top Recommended Compact Truck and got the highest rating for the Insurance Institute for Highway Safety Front, Side, and Roof Strength Evaluations.

The Nissan Frontier is in its third generation, which continues to see upgrades to the style of the truck, its performance, and the exciting features it offers. We’ve seen a real evolution of the model through its three generations, and the current generation shows off the best of what the Frontier has offered. It looks as good as it ever had, it offers the most powerful performance, and it includes some of the most advanced technology.

If you limit your search only to the third generation of the Nissan Frontier, you will have a lot of great options to choose from. You’ll also enjoy a truck that will give you many more years of reliable performance.

Multiple engine options have been made available for the third generation of the Nissan Frontier. Gas and diesel 2.5-liter engines were offered, as were turbocharged engines. The powertrain was offered in two- or four-wheel drive, and with either a six-speed manual transmission or a seven-speed automatic transmission. The new powertrain options have given drivers more horsepower and torque, more towing power, and smooth handling. With the new Nissan Frontier, drivers could do more with their work or they could just enjoy a more exciting driving experience.

In 2020, the Nissan Frontier was given some style upgrades in a late-generation refresh. The new Frontier has a bulkier profile with a broader grille accented with a thick, chrome border, running boards, engraved wheel wells, and more. Black or chrome trim provides interesting and stylish accents.

The upgrade also included the introduction of a Pro-4X trim level.

As technology features were upgraded on the Nissan Frontier, so were the safety features. The third generation saw a lot more safety features than basic airbags. Some of the new features on the third generation included the Nissan Intelligent Mobility technology, which came with an around view monitor and a blind-spot monitoring system. Stability and traction control, anti-lock brakes, and a backup camera are also included.

Finding the Right Nissan Frontier for You

The Nissan Frontier has always been a reliable truck that you would just as easily be able to use for your work as for your everyday driving. It’s stylish, offers a comfortable ride, and has some fun convenience features. Its style has continually evolved, and it is one of the best-looking trucks on the market. You can get it in a variety of configurations to get just what you need for passenger and cargo space, as well as just the style you like.

Tim’s Truck Capital offers a wide range of Nissan Frontier models from recent years, and we would be happy to help you find the perfect model to meet your needs. Our knowledgeable associates can help you understand how each of the truck’s features will impact your driving experience so that you can choose the right configuration. By shopping for previously owned models, you open up your options and get the opportunity to save a lot of money. You have more configurations to choose from, and you won’t have to spend as much to get them.

Visit us today to explore our Nissan Frontier models and to take a test drive. You’ll fall in love with this truck’s smooth handling and comfortable ride. We’ll help you find the right financing offers for your budget, and we’ll be there to service your new truck year after year. Visit us today and let us help you find your perfect truck.