The full-size pickup truck Dodge Ram 3500 is manufactured by FCA US. It was first introduced in 1994. The Dodge Ram 3500 is long known for its durability, capability and reliability. The pickup truck's quality has led Motor Trend magazine to name it 1994, 2003 and 2010 Truck of the Year. That is two generations of the Dodge Ram 3500. The first generation of the pickup truck was powered by five different engines and three different transmissions. They were a 3.9 liter, V6, 5.2 liter, V8, a 5.9 liter V8, a 5.9 liter inline 6 cylinder Cummins turbo diesel and an 8.0 liter, V10 engine. They were mated with a 4-speed automatic transmission or a 5 or 6-speed manual transmission.

The second generation Ram 3500, which ran from 2002 to 2009, first shown at the 2001 Chicago Auto Show, and had several even more powerful engines. Those pickup trucks were powered by a 5.7 liter, Hemi V8 engine, a 5.9 liter, inline 6-cylinder Cummins diesel engine, a 6.7 liter, inline 6-cylinder Cummins engine which could produce as much as 650 pound-feet of torque and an 8.0 liter, V0, Magnum engine. Once the Ram 3500 had been redesigned in 2008, the diesel engine was cleaner, more efficient and could tow as much as 16,850 pounds.

The one-ton Dodge Ram 3500 with its potent, powerful engines, eight-foot long bed box and dual rear wheel was the largest capacity pickup truck. Built strong enough to handle just about any job, the Dodge Ram 3500 is the perfect heavy-duty full-size pickup truck for any business. It's a large workhorse pickup truck that's available in multiple cab styles and with both single or dual rear-wheels. The Dodge Ram 3500 can handle heavy-duty applications and has the setup it takes to maximize payload and towing capacity and allow you to do the toughest jobs imaginable day after day.

The Dodge Ram is available with two drivetrain options. The pickup truck can come with either rear-wheel or four-wheel drive configurations. Plus, you can also get the pickup with beds in a wide range of lengths. The Ram 3500 is an important part of the radical Dodge full-sized truck line-up. It emerged in 1994 and has continued to evolve and get more powerful and more versatile. If you want a powerful pickup truck that can handle even the biggest, most complex jobs, get the Dodge Ram 3500. It has an incredible amount of payload and can tow just about anything you can hook up to it.

In 2009, the Dodge Ram 3500 was redesigned and updated to give it the highest towing, engine torque figures and the best travel quality as well as luxury options. Its interior was smooth, elegant, quiet and luxurious. It was covered in rich materials and had countless driver assistance and high-tech options. This was the fourth generation Dodge Ram. The new generation of Dodge Ram trucks was actually revealed to the public in Detroit in 2008 at the North American International Auto Show. The extensive lineup included Ram 2500, 3500, 4500 as well as 5500 models. It was an impressive show.

In 2010, Dodge and the Ram truck brands separated. In 2011, Chrysler created an all-new Ram brand. To keep the Ram brand competitive, Chrysler introduced a new optional Hemi engine, a new suspension, a new four-door cab and the new Rambox storage system. The Rambox provided was inside the walls of the truck bed and offered more secure storage. Plus, beginning in 2011, the Ram 3500 had a manual transmission and it was marketed as a 'class exclusive' option. Other American pickup truck manufacturers had discontinued installing a manual transmission in pickup truck models offered in the North American market. 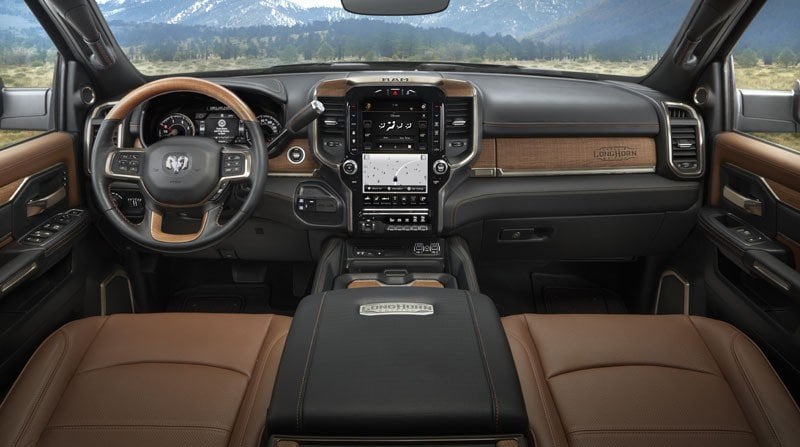 Chrysler has continued to make excellent improvements in the Ram 3500. Today it is the top heavy-duty pickup truck. It has the largest maximum towing capacity, 37,100 pounds. The Ram 3500 has the highest engine torque with its Cummins diesel which can produce an astounding 1,075 pound-feet of torque. Plus, its ride is smooth and elegant, its quiet, luxurious interior is covered in rich materials, it has myriad driver assistance features and endless high-tech options including a 12-inch touchscreen infotainment system. All of these help to make the Ram 3500 the most capable, luxurious heavy-duty pickup truck.

A Tradition Of Innovation And Excellence

Ever since its introduction in 1994, the Ram 3500 has had a tradition of innovation and excellence. It coupled a Cummins B Series engine and a 5-speed manual transmission or a heavy-duty A727 automatic transmission and a pickup-based cab. The diesel engine option was totally different to what types of diesel engines the other major truck manufacturers were offering. The straight-six turbocharged Cummings diesel engine featuring direct injection was a bold step that enabled buyers to get much more out of the Ram 3500 when it comes to getting the tough jobs done in a timely manner.

The 1998 version of the Ram 3500 featured a 5.9-liter, 250 horsepower, Magnum V-8 engine as its base power source. Its available optional engines were a Cummins diesel and a gasoline-powered Magnum V10. Plus, the pickup truck was offered with front-wheel as well as four-wheel drive configurations. That excellent set up and options put the Ram 3500 head and shoulders above the competition. That outstanding version of the Ram 3500 turned a lot of heads and caused a growing number of truck lovers to turn to Dodge Ram when they wanted the most powerful pickup truck available to them.

The 2001 version of the Dodge Ram 3500 is another in the line of Ram heavy-duty pickups that offered superior towing capacity. The 2001 Ram 3500 was equipped with a 5.9 liter turbocharged Cummins diesel that worked in tandem with a six-speed manual transmission. Using a 4.10 rear gear, it could tow as much as 15,000 pounds. This is a heavy-duty pickup truck that you could depend on no matter the job you have to do. It is a large workhorse truck that helped establish the Dodge Ram 3500's reputation for being built to haul and tow even the largest loads. It's the perfect work truck.

Dodge made improvements to the Ram 3500 each year. In 2002, a 345 horsepower V8 engine and a dual rear-wheel setup were standard on the heavy-duty full-size truck. In 2003, the one-ton Ram 3500 had a setup with a single or dual wheel available. The 2004 Ram 3500 increased its towing and payload capacities. To handle the toughest jobs, the 2005 full-size Dodge Ram 3500 pickup could be equipped with available setups enabling it to further maximize its towing and payload capacity. In 2006, the powerful, large Ram 3500 came with a wide range of cab styles and bed lengths and an available 16,150 pound towing capacity. It added available single and dual rear-wheel and more cab styles in 2008.

Between 1994 and 2009, the Dodge 3500 heavy-duty pickup added a Quad cab and a four-door Mega cab body style. It also had a powerful 5.9 liter Magnum V-8 engine and added a 5.7 liter V8 Hemi engine, an 8.0 liter, 305 horsepower, Magnum V-10 gasoline engine and a 5.9 liter diesel engine as well as a new 6.7 liter turbocharged Cummins diesel engine. In 2011, the impressive Ram 3500 became part of the all-new Chrysler Ram brand. The company then went on to make the heavy-duty Ram 3500 one of the top pickup trucks in the North American market. It became the 'go to' work truck for a lot of people.

The Ram 3500 has steadily grown in popularity because not only is it a highly capable work truck with the ability to haul and tow an incredible amount, it has lots of high-tech and driver assistance features. This has helped to set it apart from the many other work trucks on the market. Plus, the Ram 3500 is known to surprisingly be very luxurious. It has comfortable seating, a spacious, well-designed cabin, a touchscreen infotainment system that's better than the competition and many other amenities that are rarely found on work trucks. That helps to make the Ram 3500 a pleasure to drive.

Many Years And Models Available

If you are seriously interested in getting a pre owned Ram 3500, visit Tim's Truck. They have a wide range of used Ram 3500 years and models available. You can browse their inventory online or stop by, see the vehicles in person and test drive any of them that you want. The professionals at Tim's Truck can answer any questions you have about the Ram 3500. Whether you want a pre-owned older model or a newer one, you can be sure to find it at Tim's Truck.