A popular full-size pickup truck, the Toyota Tundra was introduced in the 2000 model year. Built with the look and feel of an American truck, the Tundra even had a V8 engine. An instant hit, Motor Trend magazine named the Toyota Tundra it's 2000 and 2008 Truck of the Year. By 2007, the second generation half-ton Tundra controlled 17% of the full-size pickup truck market.

When Toyota first publicly introduced the Tundra prototype, it was known as the T150. However, Ford filed a lawsuit and other automotive experts agreed the name was much too close to the Ford F-150. So Toyota renamed the truck the Tundra. Just slightly larger than Toyota's T100, many said the Tundra was too small and carlike and couldn't compete with the domestic pickup trucks. Toyota had a 120,000 production capacity for the new Tundra. However, the Tundra quickly had Toyota's then largest initial vehicle sales in its history.

The new Toyota Tundra received lots of awards and accolades. Motor Trend named it 'Truck of the Year'. Consumer Reports voted it the 'Best Full-Size Truck'. And it quickly became clear the Toyota Tundra could pose a serious challenge to the Big Three truck brands. With engine choices like a 190 horsepower, 3.4 liter V6 and a 245 horsepower 4.7 liter V8, the Tundra steadily gained more buyers. Edmunds.com, Truckin' magazine and Popular Mechanics all give the Toyota Tundra rave reviews. 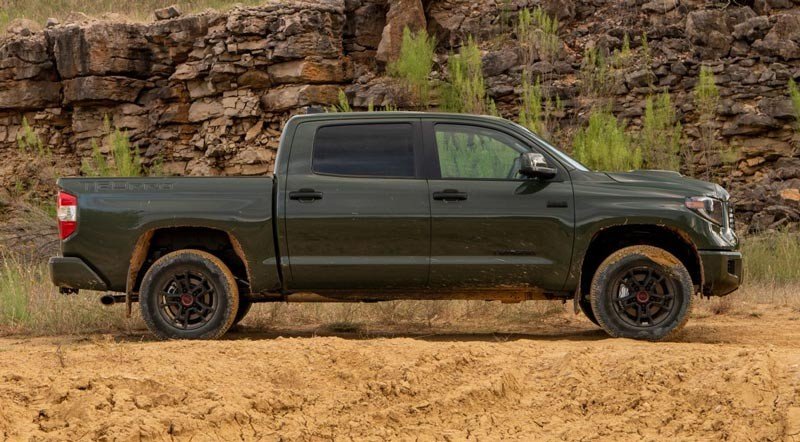 Upgrades Inside And Out

In 2003, Toyota updated the Tundra's grille. In 2004, the company added a Double Cab version to the lineup. It was a true crew cab that had four normal sized doors. Toyota also copied interior and exterior details from its popular Toyota Sequoia and added them to the Tundra. Plus, the company made the bed of the Tundra almost 5 inches longer than the one on the Ford F-150 and the Nissan Titan. The Tundra was also 13 inches longer than the competition's Regular Cab and Access Cab versions and 3 inches taller. 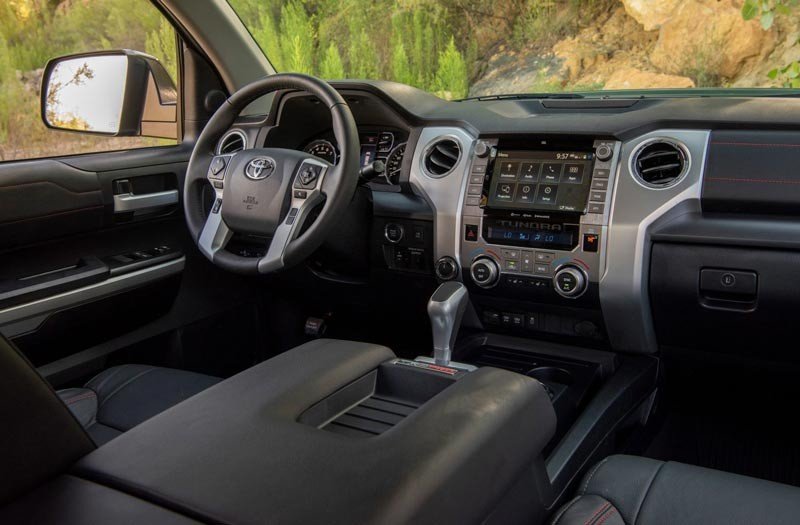 In 2008 and 2009, Toyota continued upgrading the Tundra and making it geared towards tradespeople. That included adding several additional standard features and the new 'Tundra Grade' trim. Toyota's E85 fuel capability became standard equipment on Tundra models with a 5.7 liter V8 engine. Toyota also upgraded the TRD Sports package. Plus, they created the TRD Rock Warrior package for the Tundra. This enabled buyers to get the special equipment they wanted on their Tundra to customize it and make it better suited for their work and play needs.

Safety was always an important focus in designing the Toyota Tundra. It was the first full-size pickup truck to be named a Top Safety Pick by the Insurance Institute for Highway Safety. Its standard stability control and rear crash protection received perfect scores. Its side impact collision test received the highest possible rating and its frontal offset crash test score was 'Good' overall. On the frontal crash test ratings, the NHTSA gave the Toyota Tundra four out of five stars for front driver and passenger safety. The truck's structure absorbs the energy generated during crashes to protect the occupants.

The Toyota Tundra has many unique standard safety features. Both front seats have dual side airbags. Plus, its side curtain airbags provide head and torso protection for people in the front as well as the rear seats. The Tundra's most unique safety feature is its torso type side airbag. This feature isn't available on many other pickups. It shows Toyota's commitment to ensuring both the driver and passengers in the Toyota Tundra are safe and protected should accidents happen.

Toyota redesigned the Tundra for 2014. They added a larger grille, raised the hood line, enhanced the front and rear fenders, redesigned the tailgate, taillights and the interior. The Tundra got a 3.5-inch infotainment screen, new gauges, a backup camera, Bluetooth connectivity, new seats, redesigned dashboard, updated ergonomics, improved materials and metal-look surfaces. Toyota increased the power in the 4.0 liter, V6 engine to 270 horsepower and 278 pound-feet of torque. They improved the steering feel by re-valving the steering rack and adding new damping rates to the suspension for improved ride quality. They also added the 1794, a new premium luxury trim.

Toyota introduced the Tundra TRD Pro in 2015. That made six trim levels in which the Tundra was available. Plus, they added a standard 3.5-inch TFT multi-informational display and rear under seat storage trays to the Limited Double Cab and SR5 models. In 2016, Toyota updated the SR5 and 1794 Edition's front chrome grille and made Flex Fuel standard on 5.7 liter V8 models. Plus, the Platinum and 1794 Edition got Rear Cross Traffic Alert and Blind Spot Monitor as standard equipment. The Tundra also got an updated Entune 2.5 system entertainment system and the TRD Off-Road Package was offered on the 1794 Edition.

A four-wheel drive Toyota Tundra CrewMax with a 5.7 liter, 381 horsepower V-8 engine towed the 292,500 pound Space Shuttle in 2012. And a customer's 2007 Toyota Tundra was able to rack up over one million miles. That's just two examples of the Toyota Tundra's long-term power and durability. Plus, Toyota continues to upgrade the Tundra's exterior appearance, style and reliability. The company also upgraded the cabin's interior every year.

The Toyota Tundra is now in its third generation and it has had groundbreaking changes. It now has a 389 horsepower twin-turbo V-8 engine that produces 479 pound-feet of torque. The Tundra is also available with a hybrid powertrain that has 437 horsepower and makes 583 pound-feet of torque. A 10-speed automatic works with both powertrains. Plus, the Toyota Tundra now has a coil-spring multi-link suspension for a more controlled ride. It can also come with an air-spring suspension and electronically controlled dampers. Other upgrades include an optional 14-inch infotainment system screen and a maximum towing capacity of 12,000 pounds.

If you want any year or model Toyota Tundra, visit Tim's Truck. They have a large assortment of used Toyota Tundra models from which you can choose. Browse their great selection on their website or stop by and speak with their friendly, knowledgeable staff.